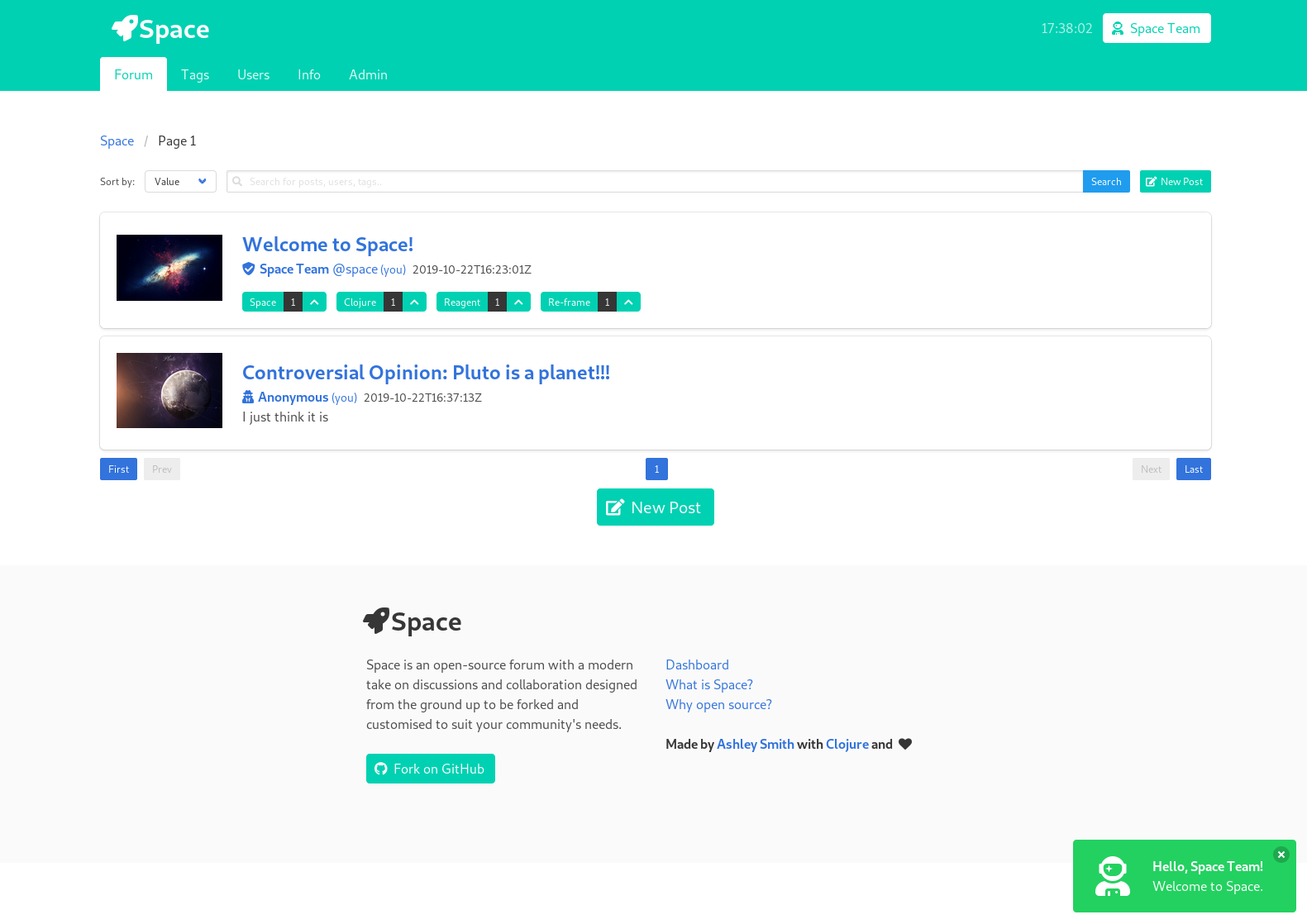 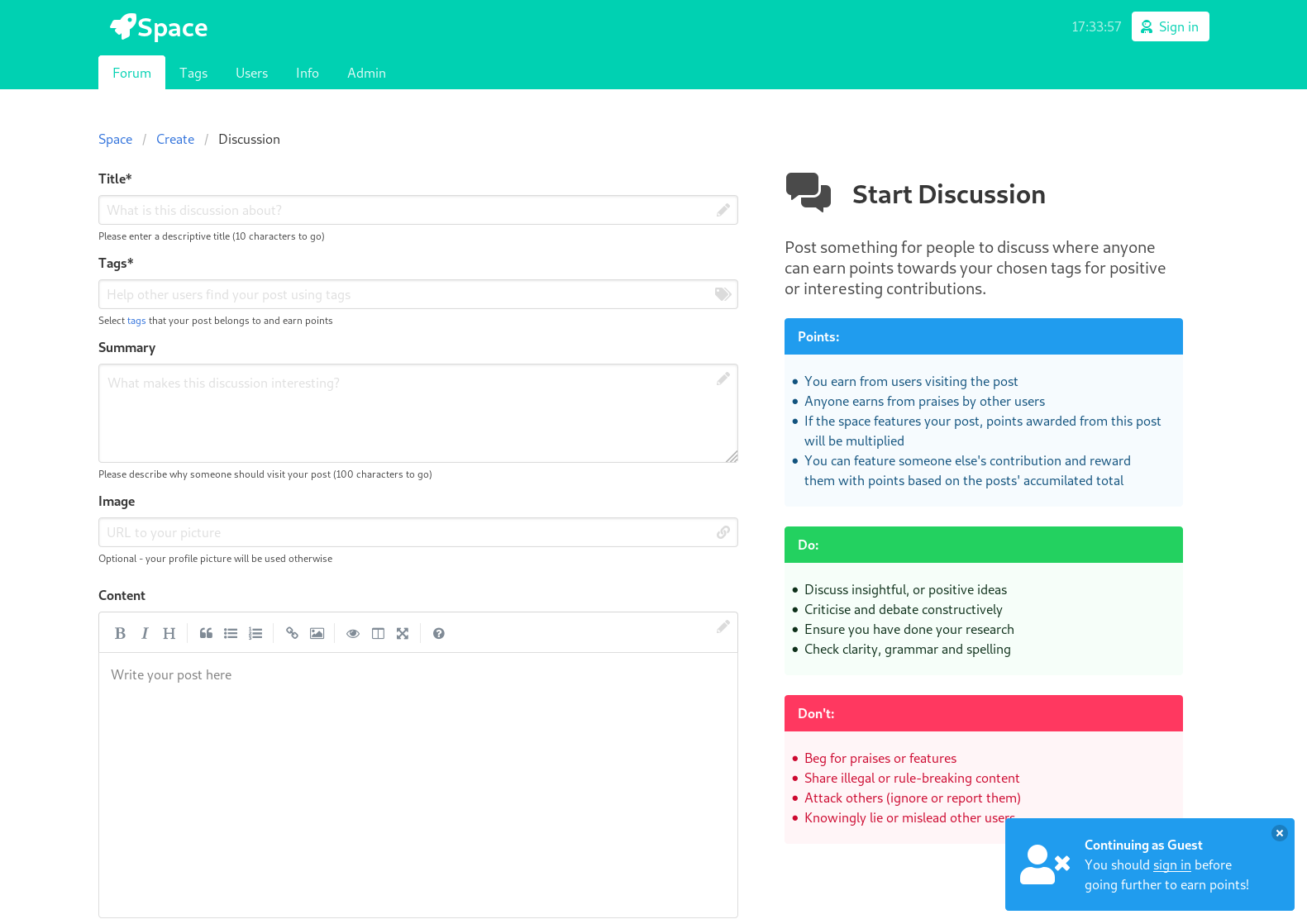 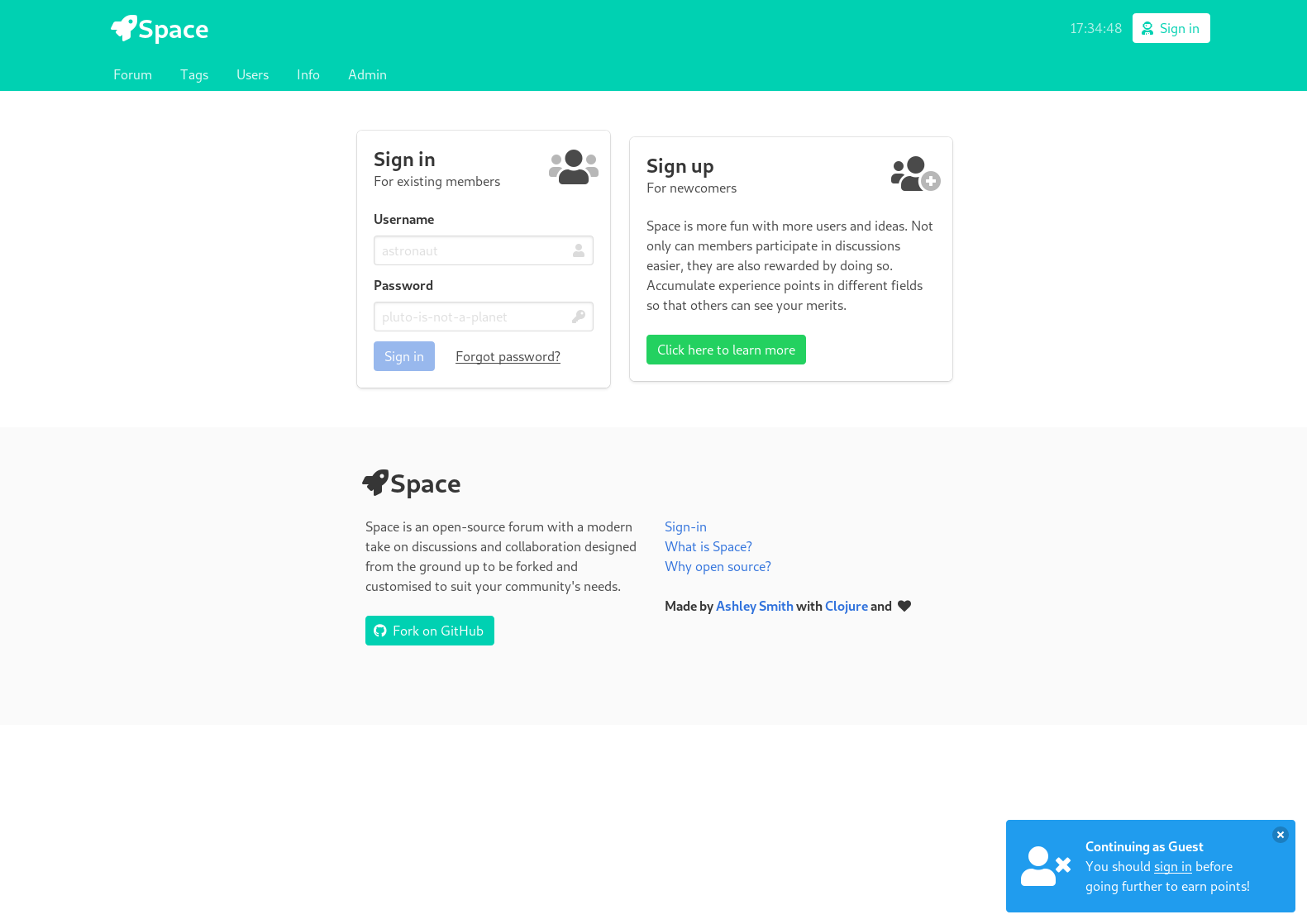 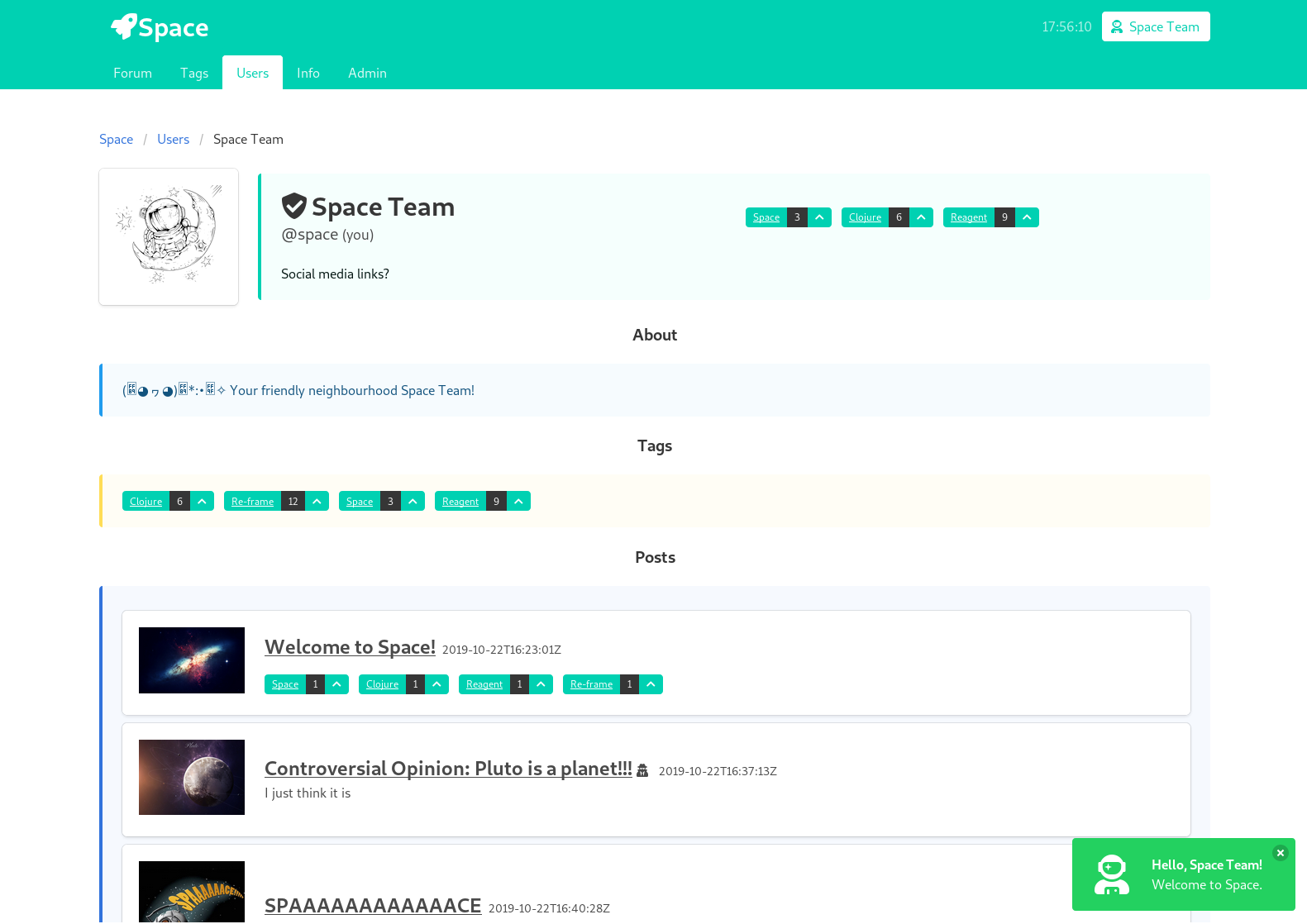 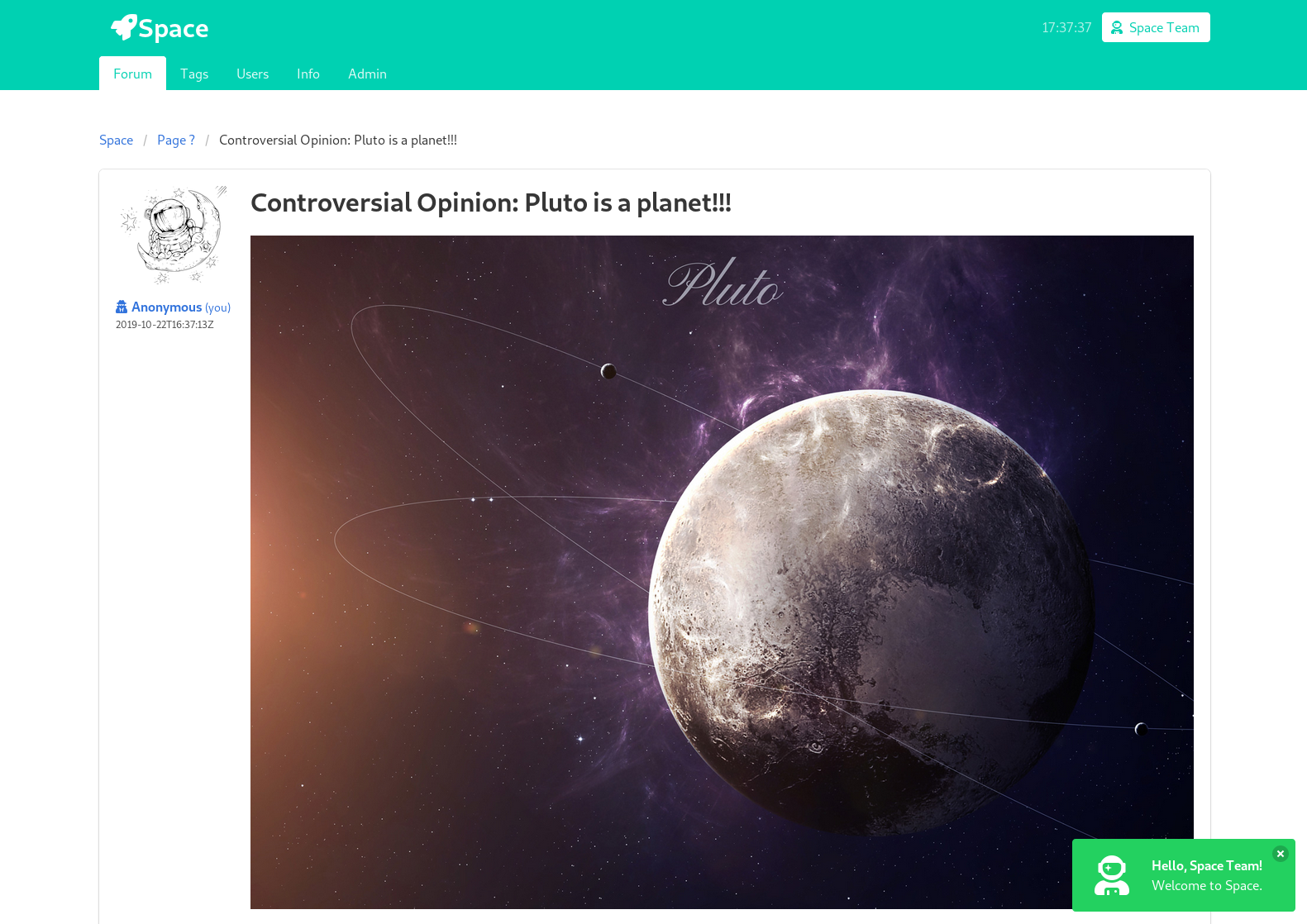 GitHub repository for Space can be found here.

Space is an open-source forum that I was making in order to learn Clojure. I’ve never done any sort of web development other than this Blog with Hakyll and some basic assignments for university. I had heard a lot about RESTful APIs but I had no idea what they really were, so I wanted to try making one for myself.

The idea of Space came from my experiences with learning and asking questions. Sometimes, you just need to ask for help — maybe you don’t know enough about the subject to ask the right questions, or maybe the bug you’re experiencing isn’t the code but your approach, something which is harder to learn in tutorials that show solutions rather than workflow.

A video showing the creation of a forum post.

When newcomers go to Stack Overflow, their first impressions can be hit or miss. If they fail to supply a project that allows for the reproduction of their error, they may get shot down before anyone offers to help. This is very important, as Stack Overflow is more of a resource than a support community, and so must maintain high-quality questions and answers to hopefully answer the further questions on the same topic in the future.

However, not all questions are about correctness — when learning, a lot of questions are merely probes for learning something new. If you’re with a teacher, asking good questions is a great way to learn, but the requirement of preparing code snippets makes this rather difficult.

I intended Space to be a compliment of Stack Overflow. I want it to be a forum that a community could set up and open up to newcomers, and to encourage people to offer their advice and ideas whenever possible through gamification. With Space being open source, a community would host their own Space and have true ownership of their content. While Reddit is a great place, it did kill off most forums by having everything in one place. Because of this, a lot of communities suffer from having to do things the Reddit way, as well as their identities being shared between each community they’re a part of.

Screenshot of the forum’s landing page.

I have this idea of tags being like skill levels that you can work on while using Space. They are both the ranking system of posts as they act like a bounty value, and the incentive for people to respond to posts made by other users. It’s a cycle.

The goal of a tag is to act as a level. When you make a post, you associate tags with it that will act as categories. The post will have levels associated with its tags that come from your own levels — meaning that in a programming Space, a user’s Clojure level will dictate the Clojure level of their post, assuming they tagged it correctly.

Posts accumilate experience points through a variety of factors, but ultimately the longer the post stays up and the attention it receives increases its levels further. The higher level the post, the more experience points users will receive from participating and responding to said post. Thus, you earn points by solving people’s problems or discussing their topics, and when you decide to post, your post will be considered more worthwhile for other users.

This doesn’t mean that newcomers posts get placed at the back of the queue — instead, it means that their posts become easy targets for experience points as if their posts go unnoticed for too long, the experience rewards will increase and thus it becomes more eye-catching for people to look at. It also would mean that users will have a higher reward for participating in low-difficulty threads.

Tags could eventually evolve elsewhere too. They could be used as currency, used in forum games or give-aways or used as roles to organise site users further. 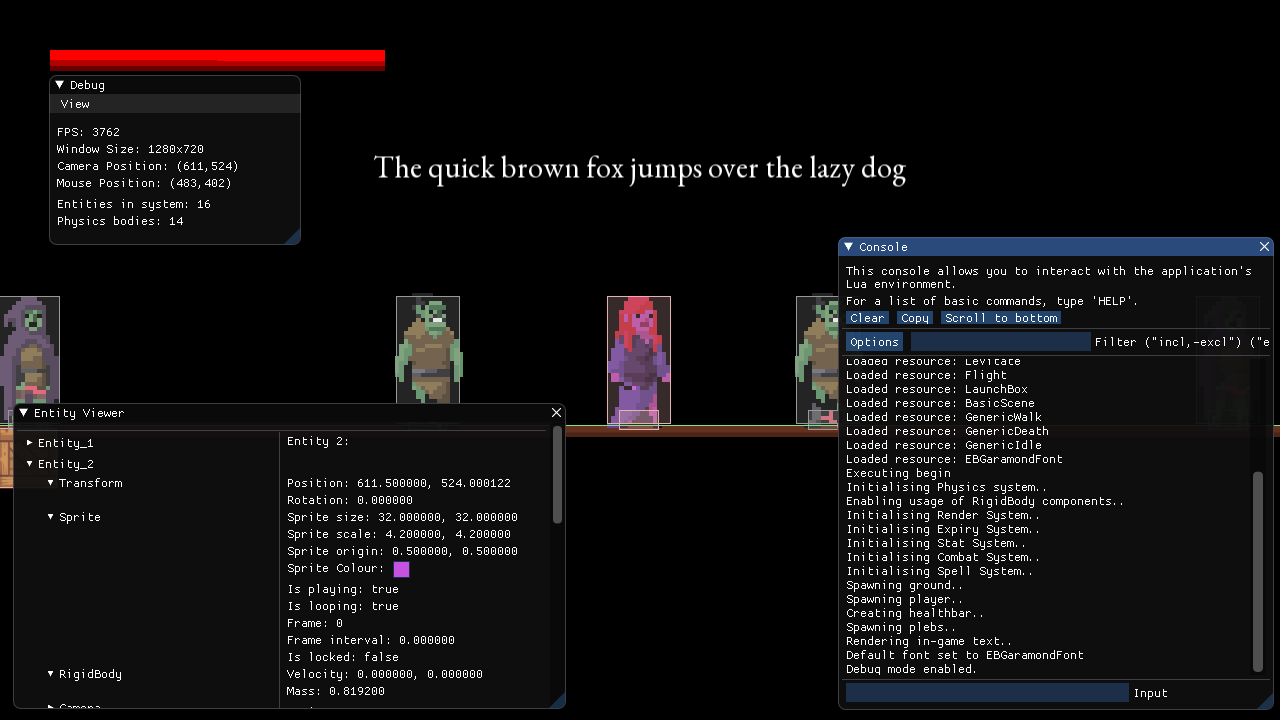 A prototype engine built to learn how to integrate Lua and physics.
Next Project

A fun revisit of the GameMaker engine.