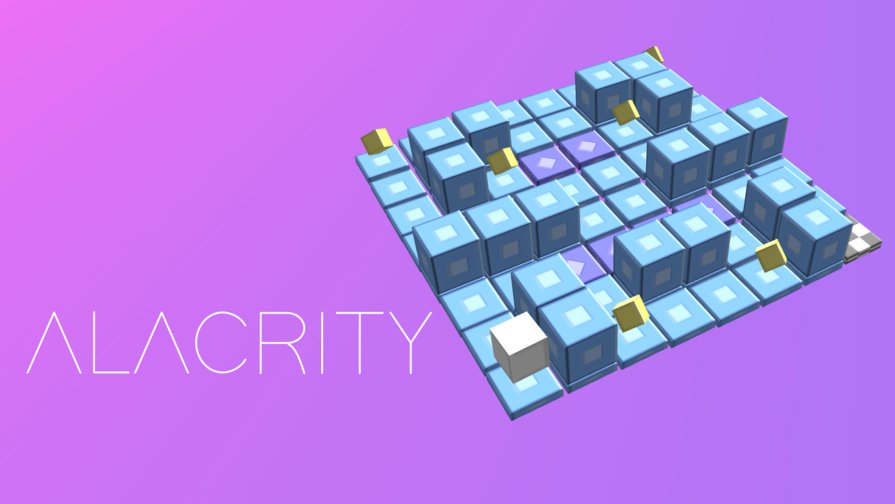 GitHub repository for Alacrity can be found here.

Alacrity is a tile-based puzzle game where you have to collect pickups and get to to the finish before time expires. It was made as a university assignment between myself, my good friend Holly and our teammate Elliott. Alacrity is quite a special game to me, as it was one of the first times in my life where I have felt that I was truly recognised for my efforts. Note that the time-attack element of the game came from the requirement that we needed to make a ‘racing’ game.

How can I play?

Check out the releases page and download the latest release. Simply extract the .zip folder and run Alacrity.exe to begin playing! Use the arrow keys or WASD to move around — your goal is to collect all the pickups and make it to the goal before time runs out! Good luck!

How was it made?

Holly was the team leader, so while the game was a combination of our ideas, she had to design a plan of attack as well as keep track of progress. Elliott handled the character, and the rest came to me. Not by force, I was just constantly wanting more to do. The level design as well as the way that we built and deconstructed them in game, the way the player interacts with it (such as the platforms falling down and the player dying), the smooth wave motion the tiles all do and the major implementation of the main menu were all done by myself.

This was the first assignment that wasn’t based around some engine like Unity. I have always struggled with Unity as I chose to do Maths and Further Maths in sixth form, therefore programming as a whole, including its uses with Unity, wasn’t as clear to me as it was with the other students. After studying hard, I seemed to have surpass many of my classmates which was illustrated by the results of this assignment. This assignment was done in DirectX, something none of us had used up until this point other than in class, however, I had been tinkering with Monogame and already begun my obsession with going engine-less in gamesdev.

During presentation, the course leader announced that our game was above the kind of standard he was expecting and that he was pretty disappointed in the previous projects. I’ve always been a little bit unsure of myself with presentations, so when the three of us succeeded on such a level we were thrilled. We were invited to show our game off at the end of year awards ceremony. Usually only Unity games are good enough to go, but fortunately we made it. I didn’t want to go at first, but I was convinced by Holly and I was very happy with the way things turned out. Many parents and lecturers admired our game, each compliment resonating inside me. We won an award for having the best game of the show which felt amazing knowing that I implemented most of the heavy mechanics in the game. Then, even more good news came our way.

Make sure to check out this addictive puzzle game made by SHU students #Alacrity #Moreish pic.twitter.com/jUXHVq6yv6

A tweet showing our game being showcased at Games Britannia.

We were then invited to show our game off at Games Britannia, an annual event our university holds. We simply were allowed to set up our game on a computer so that people attending the event could play it. Holly and I attended the event and talked to some of the kids playing, asking them what they wanted to do after school and talking about ourselves. We talked to more teachers and lecturers and even some people from local games studio Sumo Digital, who were showing their game Snake Pass at the time. We also got tickets to go to Unite Europe in Amsterdam, which is a Unity event, as they were mostly expecting Unity games to be there. Unfortunately I was very sick shortly before the flight, so Holly went without me.

Overall, this game was pretty big for my academia.

A remake of my Alacrity in a homemade engine.